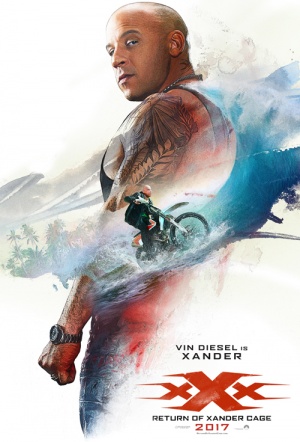 After coming out of self-imposed exile, daredevil operative Xander Cage (Vin Diesel) must race against time to recover a weapon known as Pandora's Box, a device that controls every military satellite in the world. Recruiting a new group of thrill-seeking cohorts, Xander finds himself entangled in a deadly conspiracy that points to collusion at the highest levels of government.

Diesel isn't quite 50 yet, and has very big arms, but we're still nearing Roger-Moore-in-A-View-to-a-Kill levels of barely dominating his own film: you feel sorry for the conspicuously agile stunt doubles who've had to shave all their hair off.

Only the release of a new Police Academy film could cause less excitement. But Vin, great ridiculous beefcake lunk that he is, does provide us with some fun.

It's hilarious and harmless fun.

...there's no time for such trifling issues as continuity and plausibility when the fate of the world is at stake.

We've seen all these stunts pulled before, and seen them done better, but there's some pleasure to be had here - even if it's of the extremely guilty kind.