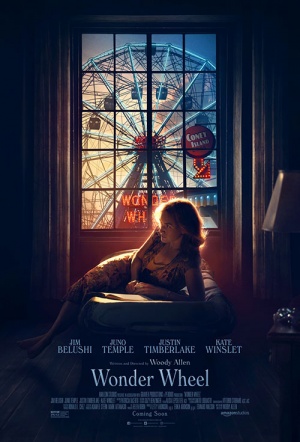 Wonder Wheel tells the story of four characters whose lives intertwine amid the hustle and bustle of the Coney Island amusement park: Ginny (Kate Winslet), an emotionally volatile former actress now working as a waitress in a clam house; Humpty (Jim Belushi), Ginny’s rough-hewn carousel operator husband; Mickey (Justin Timberlake), a handsome young lifeguard who dreams of becoming a playwright; and Carolina (Juno Temple), Humpty’s long-estranged daughter, who is now hiding out from gangsters at her father's apartment.

Perhaps it's that [Woody] Allen doesn't think people can really transcend anything ever. He doesn't have a tragic writer's temperament.

It's got movement and flow, it's got a vibrant sunset look of honky-tonk nostalgia, and it's got a bittersweet mood of lyrical despair that the film stays true to right up until the final note.

Like that giant metaphorical carousel looming over them, it's a movie that's spinning its wheels.

Mr. Allen certainly keeps you busy with all these colours, tones, influences, complications, stereotypes and histrionics, but to little end.

Like Winslet's character, Allen is stuck in the past and Wonder Wheel is a crushing reminder of his present.

"Oh god, spare me the bad drama," a character in Woody Allen's "Wonder Wheel" implores. Would that we could be so fortunate.

The warming affection that the director has bestowed on so many of his best characters is largely missing. In fact, he seems barely engaged.