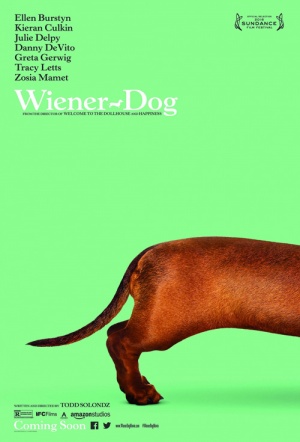 "Tells several stories featuring people who find their life inspired or changed by one particular dachshund, who seems to be spreading a certain kind of comfort and joy. Man's best friend starts out teaching a young boy some contorted life lessons before being taken in by a compassionate vet tech named Dawn Wiener. Dawn reunites with someone from her past and sets off on a road trip picking up some depressed mariachis along the way. Wiener-Dog then encounters a floundering film professor, as well as an embittered elderly woman and her needy granddaughter - all longing for something more.

"Twenty years ago, Todd Solondz took the Sundance Film Festival by storm when Welcome to the Dollhouse won the Grand Jury Prize at the 1996 Festival. Since then he has gone on to establish himself as one of the most uncompromising voices working in film." (Sundance Film Festival)

A hapless Dachshund witnesses the spectrum of human unhappiness in this sly, stimulating provocation from Todd Solondz.

Doesn't find Solondz going light to deliver an inspirational medley. Instead, he's created arguably his most caustic film since Happiness.

Watching a Solondz film has never been a particularly easy experience, yet Weiner Dog offers a droll playfulness not seen since Welcome to the Dollhouse.

Life may be as unfair and arbitrary as Solondz portrays it, but it is arguably more diverse in its moods and its ups and downs. The film may not be a dog, but nor is it likely to become anyone's best friend.

An engaging, albeit slight, adventure that toys with the absurdity of mortality.