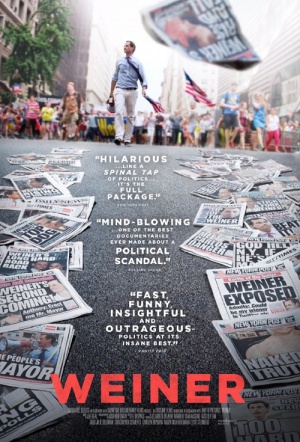 "Many politicians have seen their careers careen off the tracks, but few instances have been captured so completely on film as the incisive and painfully funny Weiner.... What begins as an unexpected comeback from a disgraced ex-congressman takes a sharp turn once Weiner is forced to admit to new sexting allegations. As the media descends and rips apart his every move, Weiner tries desperately to forge ahead, but the increasing pressure and crippling 24-hour news coverage halts his political aspirations dead in their tracks.

"Weiner deftly teeters the line between political farce and personal tragedy, exposing the ex-congressman's hubris while highlighting the sheer ugliness of the media's takedown of his family." (Sundance)

A rollicking and never-dull insider's view of a political campaign that leaves fascinating questions unanswered.

The narcissism is all up there onscreen, but shame will have to wait for the sequel.

A cringe-inducing portrait of an arrogant politician's self-immolation ...

A compelling, deep dive into a scandal that so many, especially the New York Post and Stephen Colbert, had painted as the simple - and crude - case of one prurient politician.

The filmmakers' cameras capture Weiner, perhaps best known for his career-crippling sexting scandals of 2011 and 2013, in a plethora of awkward, squirm-inducing, shameless, even clueless moments.

Plenty of political docs let us see a campaign confronting bad news, but this is a doozy, and the level of access here makes the film hard to turn away from.