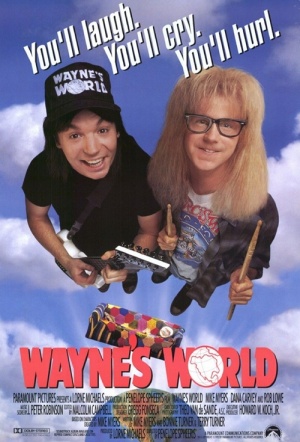 In this incredibly successful, often-quoted comedy, based on the Saturday Night Live sketch of the same name, Wayne (Mike Myers) and Garth (Dana Carvey) host a public access TV show about the important issues - rock music and babes. When a TV producer (Rob Lowe) buys the rights to their show and falls for the same girl as Wayne, the bubble the pair inhabit implodes. And Bohemian Rhapsody is sung. Oh, how it is sung.

The film tends to be funny when confining itself to short sketches or dopey television-based humor, flat when pretending to be anything more.

Like the Bill & Ted movies, this one works on its intended level and then sneaks in excursions to some other levels, too.