Voyage of Time: The IMAX Experience 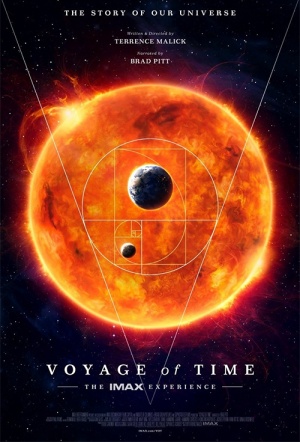 Oscar-nominated director Terrence Malick (Tree of Life) explores the life and death of the known universe with an IMAX camera.

"The wildly ambitious Voyage of Time: The IMAX Experience is every bit as epic as its name implies: Malick leads us on a temporal trip through the history of the universe. After witnessing the birth of stars and the evolution of life on Earth, we pause to wonder at the sun and planets before plunging into the inky depths of the oceans, where incandescent creatures float in the darkness. Featuring soulful narration by Brad Pitt (the longer, standard-format version features the voice of Cate Blanchett), the film brings a contemplative and speculative tone to the grandeur of IMAX documentaries; it sprawls across the screen with glorious images both real and fabricated, both earthbound and celestial." (Toronto International Film Festival)

Explicitly addressed to a child, the film can't help but feel like lovingly assembled kiddie fare, a primer for what's said to be a more ambitious and intellectually speculative vision.

After all the comparisons have been made, this is a magnificent documentary that is going to set the benchmark for history-of-the-universe films in the years to come.