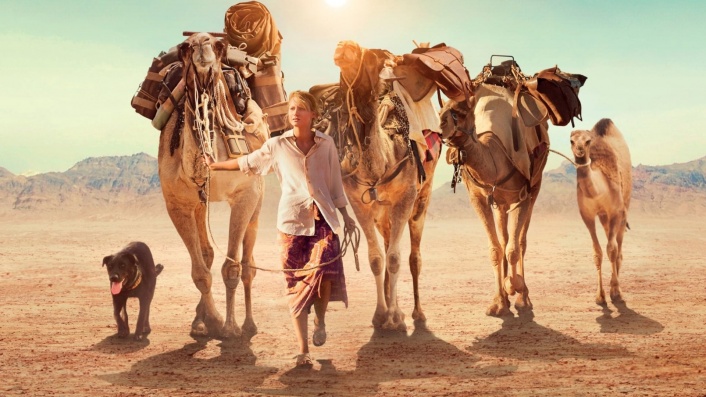 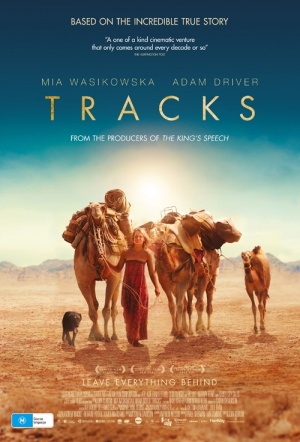 Mia Wasikowska leads this Australian true story as Robyn Davidson - a young woman who traversed 2,700km of brutal desert on foot, from Alice Springs to the Indian Ocean, with no ambition but to reach the ocean beach. Based on Davidson's best-selling memoir, from the director of The Painted Veil.

"Davidson ultimately wrote about her 1977 desert adventure in 1980 in the travelogue Tracks, which became a cult favourite around the world...  Robyn (Wasikowska) spends two hardscrabble years in the Alice Springs area learning how to train and care for camels (feral herds of which number in the thousands in Western Australia) in order to prepare for her journey. Finally ready to embark with her animals, she realises she is woefully underfunded and, despite her desires for self-sufficiency, accepts a fee from National Geographic in exchange for a written piece. The magazine adds a condition: she must allow photographer Rick Smolan (Adam Driver) to photograph her at selected stops along the way.

"As adapted by Marion Nelson, Tracks captures two arduous journeys: Robyn making her way slowly through the outback; and her (arguably more perilous) inner search. The motivation behind her decision to test her limits, and the reasons for her preference for animals over people, are subtly revealed during the chronicle of the back-breaking crossing." (Toronto International Film Festival)

Managing to cross over 2700kms of brutal Australian desert in nine whole months in the late ‘70s, Robyn Davidson’s incredible accomplishment is very film-worthy. Mia Wasikowska fills her shoes – or rather, tattered sandals – with convincing displays of determination in both seeing through her colossal journey and maintaining her stance against socialisation.

The feminist bent of Robyn's quest nicely shadows the film without ever being stated aloud.

A riveting adventure, as well as a dreamy meditative saga.

However familiar the terrain, this is a vivid, heartbreaking and captivating character piece and travel movie in one.

Mia Wasikowska talks to camels in this well-meaning but flat-footed desert adventure.

Wasikowska, without much dialogue, invests the character with complexity, intelligence and charisma.

A stirring and beautifully shot account of the author Robyn Davidson's real-life journey by camel across the Australian outback.

Captures the ravishing emptiness of the landscape and the elemental perils facing a strong young woman.

Solitude and a great sense of place is central to this gripping tale.

Trudges into competition at Venice on the basis of some spellbinding scenery, but there's a frustrating coyness to the investigation of what's driving its heroine.

The desert sequences are infused with a breathtaking beauty... but the film falls short when it comes to evoking the loneliness of being surrounded by all that space.

A journey of arduous physical challenges and incalculable spiritual rewards is evocatively rendered in this superb adaptation.