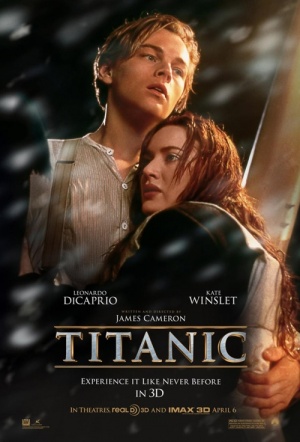 Story follows the fictional romance - between a rich girl (Winslet) and a poor bohemian (DiCaprio)  - set against the historic sinking of the Titanic, whilst on her maiden voyage  in 1912. Winner of 11 Oscars (one of only three films to win that many, alongside 1959's Ben-Hur and The Lord of the Rings: The Return of the King), this high-seas romance mixed drama with adventure to become the highest grossing film of all time. This record was broken by Cameron's own Avatar in 2010.

Of the 3D conversion, Cameron says: "This will be Titanic as you've never seen it before, digitally remastered at 4K and painstakingly converted to 3D. With the emotional power intact and the images more powerful than ever, this will be an epic experience for fans and newcomers alike."

A spectacular demonstration of what modern technology can contribute to dramatic storytelling.

A huge, thrilling three-and-a-quarter-hour experience that unerringly lures viewers into the beauty and heartbreak of its lost world.

It is flawlessly crafted, intelligently constructed, strongly acted and spellbinding.

What audiences end up with word-wise is a hackneyed, completely derivative copy of old Hollywood romances, a movie that reeks of phoniness and lacks even minimal originality.

A grand and classy production.

It should be no surprise then that it became fashionable to bash James Cameron's Titanic at approximately the same time it became clear that this was the planet's favourite film. Ever. Them's the facts.

And when you consider that it tops a bum-numbing three-hour running time, then you have a truly impressive feat of entertainment achieved by Cameron.

That the familiar story of the Titanic disaster is told with suspense is not as surprising as Cameron's clear-headed balance of truth and fiction, spectacle and tragedy.