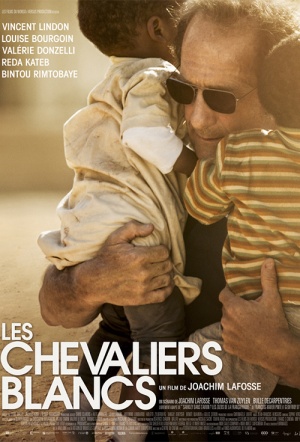 French auteur Joachim Lafosse teams up with Vincent Lindon (winner of Best Actor at Cannes 2015 for The Measure of a Man) to explore what led up to the arrests of members of Zoe's Ark, a mid-2000s humanitarian aid mission in Africa gone wrong.

"The film begins with the arrival of French adoption-agency workers in war-torn Chad. Masquerading as an NGO called Move for Kids, they claim that they will house, feed, and educate orphans in a safe compound until the children are eighteen years old. The local villagers, though somewhat puzzled by the foreigners' definition of "orphan," are seduced by the idea of giving their children a better life. But what the villagers don't know — though the audience does — is that these French "NGO" workers have no intention of staying. In the light of day, led by the relentless Jacques (Lindon), they search for children with the help of local interpreter Bintou (promising newcomer Rougalta Bintou Saleh). But under the cover of night, they discuss their exit strategy and make calls to French families about the children they'll be bringing home." (Toronto International Film Festival)

...this well-performed study of groupthink gone bad is less dramatically potent than the filmmaker’s previous effort, Our Children, but remains engrossing enough to warrant steady art house play after a premiere in Toronto’s Platform competition.