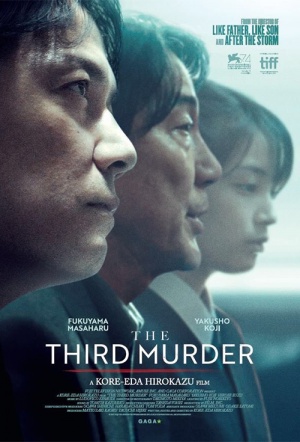 "Leading attorney Shigemori (Masaharu Fukuyama, Like Father, Like Son) takes on the defense of murder-robbery suspect Misumi (Yakusho) who served jail time for another murder committed thirty years ago. Shigemori’s chances of winning the case seem low — his client freely admits his guilt, despite facing the death penalty if he is convicted. As he digs deeper into the case, as he hears the testimonies of the victim’s family and Misumi himself, the once confident Shigemori begins to doubt whether his client is the murderer after all." (Venice Film Festival)

Compelling enough while you're watching it, frustrating then forgettable once it ends, this is a work that wouldn't command much attention if it came from any other director.

The Japanese maestro Hirokazu Kore-eda takes the narrative ambiguities of his previous movies (After the Storm, Nobody Knows) and pushes them to breaking point and beyond in this beguiling, disquieting courtroom drama.

The Third Murder is a captivating puzzle.

Kore-Eda's approach to a kind of Law and Order concept may take his followers by surprise but should ultimately satisfy most, once they realise they are in for a new type of experience.

There's plenty to chew on as Koreeda picks apart ideas of morality, law and justice.

A complex and engrossing examination of truth.