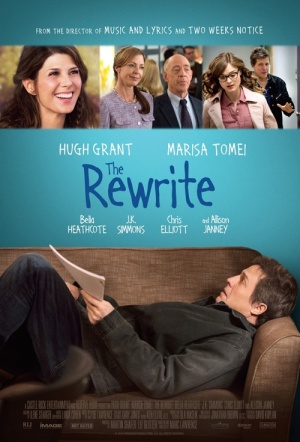 Hugh Grant is a former Golden Globe-winning screenwriter, now an embittered writing teacher, and Marisa Tomei a single mum working towards her degree, in this romantic comedy from Marc Lawrence. This is the fourth collaboration between Lawrence and Grant, after Two Weeks Notice, Music and Lyrics and Did You Hear About the Morgans?

Keith (Grant) had it all - awards, a hit movie, a wife and an inexhaustible supply of wit and charm. But 15 years later, he's alone and broke. Luckily, his agent has a job for him: teaching screenwriting at a university in the sleepy town of Binghamton. Hoping to give minimal attention to his duties and focus on his own writing, his attitude begins to turn when he meets Holly (Tomei). The pair finds themselves connected by their mutual need for a second chance.

It’s a rare pleasure to see Tomei in a lead role, and she fills out the short cuts in Lawrence’s characterization with wry warmth and a hint of swallowed disappointment.

There are moments here when sunlight breaks through the shtick.

This one becomes gooier and squishier until the comedy has entirely gone.

Grant specializes in bastards, but he makes them so charming that viewers can nearly forget, and even forgive, their consistently bad manners.

A pleasant diversion for fans of the form.

It has enough smarts, laughs and feel for its likeable characters to make it worth your while.