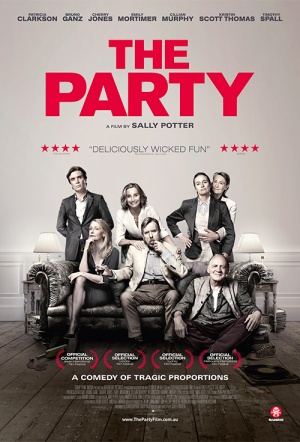 Writer/director Sally Potter recently addressed the question of why she shot her new film, The Party, in black and white. According to Potter, monochrome is “much more colourful from an emotional point of view, because people can project their imaginary sense of realism into what is a slightly obstructed image."

Even though this one-room British film shot in black and white assembles the talents of Kristin Scott Thomas, Timothy Spall, Patricia Clarkson, Emily Mortimer, Cherry Jones, Bruno Ganz and Cillian Murphy, this isn’t some Oscar bait based-on-a-play dissection on the follies of the human condition. Writer-director Sally Potter’s The Party is an up-the-guts intellectual comedy for people sick of intellectuals, cutting with its script and performances for 70 minutes before booting you out the door. It’s not memorable, but it’s short-lasting fun.

A deliciously heightened, caviar-black comedy that sets up its brittle, bourgeois characters like bowling pins and gleefully knocks them down in 71 minutes flat.

Enjoyably acted by a fine ensemble cast, it crisply skewers the hypocrisies of its left-liberal, middle-class characters.

It's openly theatrical, but if it feels like a film of a play, it's a play you really should see.

There are scenes where Scott Thomas plays several competing emotions simultaneously, often through grimaces alone, but with masterful aplomb. What do we want? More Scott Thomas comedies! Now!

Unassuming and old-fashioned funny entertainment isn't exactly what we associate with this film-maker, but that's what she has very satisfyingly served up here.

Over 71 crisp minutes of fast-paced verbal combat, Potter tests the age-old theory that it's all fun and games until somebody gets knocked unconscious.

The Party is whip-smart satire at its very best.

Patricia Clarkson steals the show, but everyone in Potter's gifted cast gets their moment to shine in a sharp-edged, claustrophobic parlour piece that puts the boot into middle-class mores.