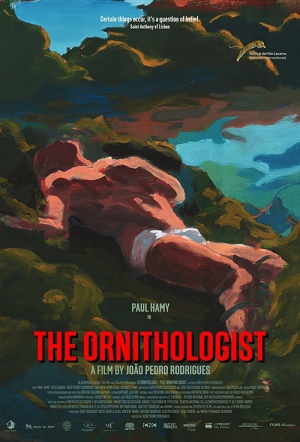 An ornithologist (Paul Hamy) studying black storks in Portugal is drawn into a series of incidents paralleling the life of Saint Anthony of Padua in this provocative drama by Portuguese auteur, João Pedro Rodrigues.

"After his concentrated bird surveying causes his boat to capsize, the unconscious Fernando (Hamy) is washed ashore and rescued by two young, seemingly innocent female Chinese pilgrims, who are lost on their way to Santiago de Compostela. Thereafter, the film bends genres and busts taboos as Fernando is forced into extreme action in order to survive a series of brutal, Stations-of-the-Cross-style tests, his metamorphosis observed all the while by the eerily placid gaze of the birds above." (Toronto International Film Festival)

A delightfully meandering, playfully queer riff on the St. Anthony of Padua legend that uses the classic man-in-a-forest motif on a journey of self-discovery.

...a keenly arousing episode that, like Rodrigues’ most spine-tingling scenes, speaks clearly about the immutable intimacies and dualities of its holy origins.

Though clearly not a proposition for either devout Christians or audiences for whom the multiplex is a temple, this is the kind of take-no-prisoners art house fare that advances and deepens the understanding of a singular director’s oeuvre as a whole.