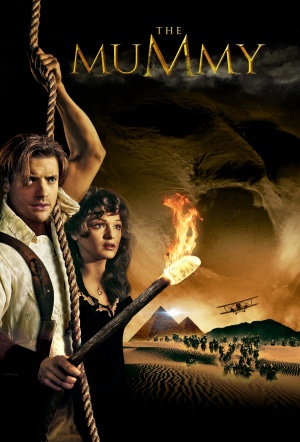 An American (Brendan Fraser) serving in the French Foreign Legion accidentally awakens a mummy while on an archaeological dig. Co-stars Rachel Weisz.

Dashing legionnaire Rick O'Connell (Fraser) and Beni (Kevin J. O'Connor), his weasel of a companion, stumble upon the hidden ruins of Hamunaptra while in the midst of a battle in 1923, 3000 years after Imhotep has suffered a fate worse than death; his body will remain undead for all eternity as a punishment for a forbidden love.

Tries to have it both ways, sending up the adventure genre for laughs while also going for some mild shocks, but the sand slips through its fingers on both counts.

A gaudy comic video game splashed onto the screen!

Don't go expecting much beyond searing sound and sensational light; together, however, they are well worth the price of admission.

There is hardly a thing I can say in its favour, except that I was cheered by nearly every minute of it.

There is much to look at - it’s like spending two hours in Michael Jackson’s Undead Neverland - but not a lot at stake.

Desert adventures. Treasures and tombs and a likeable hero in Brendan Fraser. Ignore the gaping plot holes and laughable script and you have a watchable, effects-filled romp.