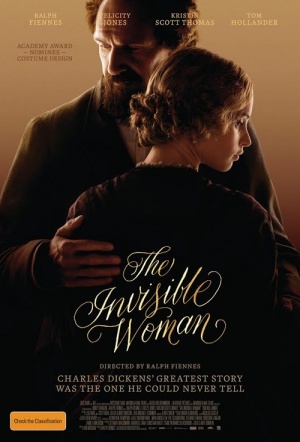 Ralph Fiennes (Coriolanus) makes his second directorial effort with this adaptation of Claire Tomalin’s award-winning biographical novel on Nelly Ternan, the secret lover of Charles Dickens. Fiennes stars as the infatuated Dickens alongside Felicity Jones (Like Crazy) as Ternan and Kristin Scott Thomas (The English Patient) as Nelly’s mother.

Nelly, a happily-married mother and schoolteacher, is haunted by her past. Her memories take us back in time to follow the story of her relationship with Dickens, with whom she discovered an exciting but fragile complicity. Dickens - famous, controlling and emotionally isolated within his success - falls for Nelly, who comes from a family of actors. The theatre is a vital arena for Dickens, a man more emotionally coherent on the page or on stage, than in life. As Nelly becomes the focus of Dickens' passion and his muse, for both of them secrecy is the price, and for Nelly a life of "invisibility".

Tomalin's book is adapted for the screen by Abi Morgan, screenwriter of The Iron Lady and Shame.

Ralph Fiennes follows up his powerful directorial debut Coriolanus with this beautifully-crafted tale, in which he stars as married author Charles Dickens, depicting his secret love affair with Nelly Ternan. As played by Felicity Jones, Ternan is more than just a would-be actress bouncing off Dickens’ celebrity bandwagon and into his bed. Rather she is portrayed as a real person, tormented by memories of her illicit affair.

Only partly a romance; it’s the tragedy of Nelly’s life that makes itself more powerfully heard.

A mature movie, prudent in the best possible sense.

A competently told tale, but there are few high points.

A career high point for Ralph Fiennes as both an actor and director.

One for lovers of ravishing craft, although the elusive emotional engagement is frustrating.