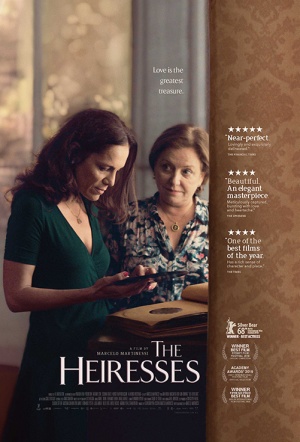 Complex relationship drama that takes an unusual look at class and privilege through the relationship of a lesbian couple in Paraguay.

"The women Chela (Ana Brun) and Chiquita (Margarita Irún) have been together for over 30 years, living a life of privilege. Times have changed though, and their financial situation has reached a stage where they are forced to sell some of their precious heirlooms. Things come to head when Chiquita is imprisoned on fraud charges related to their debts. The sheltered Chela must for the first time fend for herself, and, despite her pride, begins working as a chauffeur for the wealthy women of the neighbourhood. Her changed circumstances lead Chela to, perhaps for the first time, contemplate her life and the choices she’s made." (Sydney Film Festival)

Using largely unknown actresses with practically no screen experience yet an extraordinarily canny understanding of character, the director-writer achieves a heightened degree of insight within the confines of a stripped-down production.

This is definitely the best film about an ageing Paraguayan lesbian couple you'll see this year. It's also one of the best films of any sort you'll see, a haunting story with a rich sense of character and place.

There is much to admire for those who chime with the languid rhythms and language of loaded sidelong glances.

An empathetic and assured debut from Marcelo Martinessi.

Builds emotional involvement by infinitesimal degrees through its acute observation of characters and social context and its ultra-naturalistic performances.

...an immersive drama... that never ceases to feel utterly real.