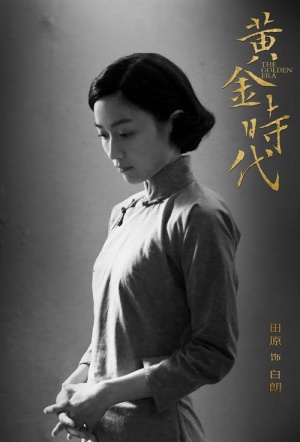 Mandarin-language biopic on Xiao Hong, the pioneering and prodigious talent only recently being recognised as one of China's most significant 20th century writers. Selected as Hong Kong’s entry for the Best Foreign Language Film at 2015's Academy Awards.

"In early-1930s Manchuria, twenty-year-old Xiao Hong flees home to escape a despotic, abusive father and an arranged marriage. Independently minded, she sets out to forge a new life in the city of Harbin, unconstrained by the social mores of her times. Soon after, she is abandoned by her lover, left with an unwanted pregnancy and a crushing hotel room debt. When the hotel owner threatens to sell her to a brothel, she writes a last-ditch, near-random plea for help to the editors of the International Gazette. Xiao Jun (Feng Shao Feng), the handsome, hard-drinking young writer sent by the journal to respond to her request, is enthralled by the fascinating young lady and her free spirit. Their intellectual affinity instantly apparent, the two writers become partners in bold, progressive thinking. And so begins not just a one-of-a-kind relationship, but also Xiao Hong's life in letters; the following decade of personal and social upheaval will see her evolve into a brilliant, politically engaged author." (Toronto International Film Festival)

Seemingly caught between a daring impressionistic approach and a pedantic recital of dates and locations, this three-hour endurance test is marked by sincere adoration of its subject...

Some writers are shown as activists, political figures, party stalwarts; Xiao, to the last, remains stubbornly committed to her art.

A biopic of ideas rather than emotions, though strangely not necessarily the ideas of the writer whose life it chronicles.