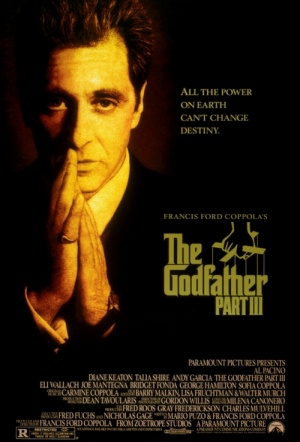 Director Francis Ford Coppola and writer Mario Puzo return to the franchise that made them famous, 15 years after the last installment. It's 1979, two decades after the events of Part II, and crime boss Michael Corleone (Al Pacino) has nearly succeeded in making his family's business "legitimate."

Michael and his lawyer B.J. (George Hamilton) are working on a deal to bail the Vatican out of financial woe. However, interested Mob parties are trying to muscle in on his business affairs. Michael tries to buy their cooperation, and his release from The Commission of Mafia families, but is betrayed when mob underling Joey Zaza (Joe Mantegna) turns on him, at the behest of patriarch Altobello (Eli Wallach) who doesn't want to let their cash cow leave the crime syndicate. Michael suffers a diabetic stroke.

Vincent Mancini (Andy Garcia), the illegitimate son of Michael's murdered brother Sonny, desperately wants to join the family. After Michael's own son Anthony refuses to carry on the family legacy in favour of a career in opera, Michael welcomes the hot-headed young man into the business and allows him to adopt the Corleone name. Vincent soon begins an affair with Michael's daughter Mary (Sofia Coppola). When the entire family travels to Sicily for Anthony's operatic debut, murder and betrayal awaits, bringing the now frail Michael Corleone face to face with all that he has lost.

Matches its predecessors in narrative intensity, epic scope, socio-political analysis, physical beauty and deep feeling for its characters and milieu.

The acting is merely passable, several characters are given nothing to do, and Michael's paranoid self-pity lends the film an absurd morality: Coppola expects us to sympathise with the semblance of virtue.

A valid and deeply moving continuation of the Corleone family saga.

From its opening scenes, The Godfather Part III has a curious and yearning aura of atonement.

Fans of the first two instalments are likely to find The Godfather Part III an unworthy heir to the tradition. First-time voters, meanwhile, will surely wonder what on earth all the fuss was all about.

Represents a certain moral improvement over its predecessors by refusing to celebrate and condemn violence and duplicity in the same breath, or at least to the same degree.