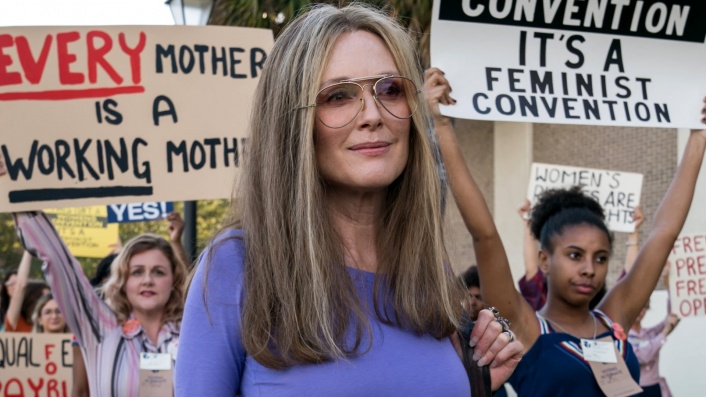 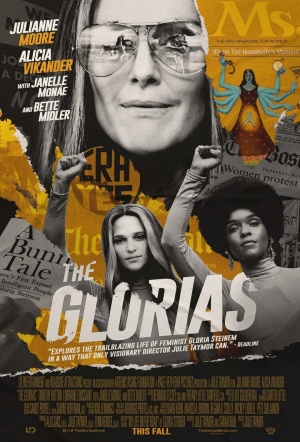 Journalist, fighter, and feminist Gloria Steinem is an indelible icon known for her world-shaping activism, guidance of the revolutionary women’s movement, and writing that has impacted generations. Based on Steinem's memoir, this atypical biopic traces Steinem’s influential journey to prominence—from her time in India as a young woman, to the founding of Ms. magazine in New York, to her role in the rise of the women’s rights movement in the 1960s, to the historic 1977 National Women’s Conference and beyond. Features a number of iconic women who made profound contributions to the women’s movement, including Dorothy Pitman Hughes (Monáe), Flo Kennedy (Lorraine Toussaint), Bella Abzug (Midler), Dolores Huerta (Monica Sanchez) and Wilma Mankiller (Kimberly Guerrero).

The Glorias is an uneven yet ultimately inspiring biopic that essentially chronicles a feminist origin story.

Another film might have mined Steinem's remarkable life for its complications and contradictions, but The Glorias settles for slapdash iconography...

The Glorias, an overlong, unfocused and distractingly stylized take on Ms. Steinem's life, commits various sins of self-indulgence, as is the wont of film director Taymor.

It's a testament to the complexity of the subject and her positivity even in the face of the most culturally entrenched caveman attitudes that we come away from this flawed, chaotic film with a warm appreciation for her achievements and her indestructible generosity of spirit.

The film is acted with great flair and emotional precision, and it’s been staged by Taymor with vividly detailed historical flavor, yet it tells Steinem’s story in a way that’s more wide than deep.

Dramatising Steinem’s life during different periods, and with different actresses, Taymor has crafted an exceedingly thoughtful portrait of a leader and the women’s movement she championed.

A straight line could be plotted through the feature which, despite its imaginative storytelling structure, still manages to hit all of the big moments in Steinem’s life.