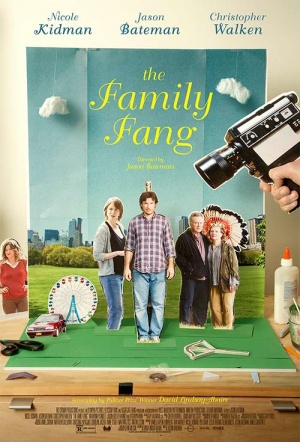 "Annie (Kidman) and Baxter (Bateman) have spent most of their adult lives trying to get as far as possible from their parents, Caleb (Walken) and Camille Fang (Maryann Plunkett). The elder Fangs have attracted both kudos and controversy for their provocative, socially disruptive body of work, which, over the past forty-five years, has involved everything from faux bank robberies to staged incidents of child-busker harassment.

"When journalist Baxter sustains a head injury in a potato-cannon mishap, he winds up involuntarily in his parents' care. Annie comes to rescue him — and also to confront Mr. and Mrs. Fang once and for all about the madness of their vocation — but the siblings are thrown for a loop when Caleb and Camille suddenly go missing and foul play is suspected. Is their disappearance a genuine cause for alarm or just another situationist prank?" (Toronto International Film Festival)

Jason Bateman proves that 'Bad Words' was no fluke with this sharp and affecting dysfunctional-family portrait.

The Family Fang goes deep into dysfunction, but even more impressively, it smuggles in the daredevilish art theories of the late Chris Burden and his ilk.

Mr. Bateman's direction of the actors is especially sensitive in this and other tricky scenes, showing a delicacy with emotional textures that isn't always matched by the story.

Jason Bateman has an affinity for directing. He and Kidman make a potent team in a provocative film that questions the limits of art in a world that forgets to be human.

Merely "playing with concepts" doesn't quite add up to a film, and "The Family Fang," adapted from Kevin Wilson's novel, feels like an extended therapy session.