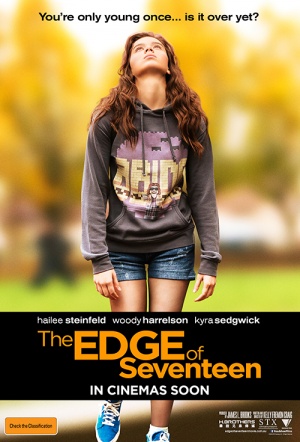 Hailee Steinfeld (True Grit) and Woody Harrelson star in this coming-of-age comedy-drama about an endearing but self-absorbed teen whose life goes into a tailspin after her older brother starts dating her best friend.

"Not many people pay attention to socially awkward high-school junior Nadine (Steinfeld), but it isn't for lack of effort on her part. The Edge of Seventeen begins with Nadine assailing her history teacher, Mr. Bruner (Harrelson), with her umpteenth breathless — and phony — crisis. Tired of Nadine's high drama, Mr. Bruner refuses to offer token consolation, though he does offer her half his cookie.

"Whatever adolescent disaster Nadine thinks she's suffering from, nothing can prepare her for what is tantamount to a personal apocalypse: Nadine's best friend, Krista (Haley Lu Richardson), has started dating Nadine's annoyingly earnest fitness-nut older brother Darian (Blake Jenner). Ugh! This unholy union sparks a new level of mania in Nadine, one that will push her to try new things — like sending brazen text messages to the cute, aloof boy who works at the pet store in the mall." (Toronto International Film Festival)

It’s a teen movie that starts off funny ha-ha but turns into something more like a light-fingered psychological thriller.

Writer-director Kelly Fremon Craig brings a spiky wit and a warm-hearted, nerd-friendly finale to a comedy that wants for nothing but a little substance.

As a memorable teen character, she’s almost up there with Cher from ‘Clueless’ or Ellen Page’s Juno. Watch and wince.

Steinfeld smartly weighs the comedy of Nadine's hormonal disquiet against her potentially tragic need for affirmation, never more adroitly than in a shaded set piece involving an accidental sext.

Manages to artfully dodge any staleness by virtue of a great script and the universally excellent performances all round...

Fast, full-hearted and graced with a beautifully modulated lead turn by Hailee Steinfeld, the movie takes the risk of playing it straight and sincere — and the risk pays off.

It strives to be something greater than a simple coming-of-age flick, and succeeds...

A very strong debut by writer-director Kelly Fremon Craig deals with all the usual teenage concerns — dating, family, school — in a way that tries to go beyond genre cliché...