Based on the 1846 Russian novel written by Fyodor Dostoyevsky. Richard Ayoade's black comedy The Double is unique, imaginative and brilliant. Think Wes Anderson meets Brazil & Being John Malkovich. Set in an almost nightmarish dystopian world, Simon James is a shy, stuttering clerk working for a giant corporation. Nobody ever notices Simon even though he has worked at the company for seven years. It's as if he's a ghost. His life then takes a bizarre turn when the new employee James Simon arrives. James looks and sounds exactly like Simon. But despite being his exact lookalike, James is everything Simon isn't, confident and charismatic. Choosing Jesse Eisenberg to play the roles of Simon & James was ideal casting. He plays both characters with perfection. Mia Wasikowska, Wallace Shawn also star and Chris O'Dowd makes a small appearance. The surreal, highly stylized production design is gorgeous. The bleak and idosyncratic The Double makes Richard Ayoade a true talent to look out for. 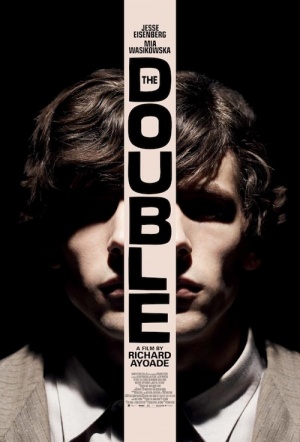