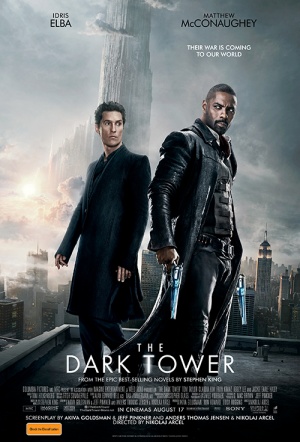 Based on Stephen King's novel series, The Dark Tower stars Idris Elba as Roland Deschain, a gunslinger hoping to preserve his dying world by reaching the titular tower. Matthew McConaughey co-stars as the film's mysterious villain, pursued by Deschain. To quote King's opening sentence, "The man in black fled across the desert and the gunslinger followed".

Relegating the killer opening line of Stephen King’s sprawling saga - "The man in black fled across the desert and the gunslinger followed” - to mid-film voiceover immediately gets this already-maligned adaptation off on the wrong foot. It’s a sign of what’s to come in this reinterpretation that misses so much of what makes The Dark Tower series tick that it’ll let down fans as much as it perplexes newcomers.

It's a highly competent and watchable paranoid metaphysical video game that doesn't overstay its welcome, includes some luridly entertaining visual effects, and - it has to be said - summons an emotional impact of close to zero.

Onscreen, The Dark Tower serves up a generic, half-baked scenario no different from a slew of better-known YA properties in which young, wide-eyed protagonists discover their connections to a hidden fantastical world.

About the only thing holding it together is Idris Elba, whose irrepressible magnetism and man-of-stone solidity anchors this mess but can't redeem it.

The Dark Tower, even as a standalone movie, had plenty of potential. But the script is a bloviate mutt.

So much is so wrong about this stunted film version of Stephen King's marvelously dense and dazzling series of eight novels, that all I can say is this unholy mess shouldn't happen to a King, much less a paying customer.

From start to finish, the movie exudes a stiff, joyless coherence.

Heaven knows, the books offer more invention than could fit in one feature film, but in their effort to introduce newcomers to this world, the filmmakers make the saga's contents look not archetypal but generic and cobbled together.

Elba is genuinely great as the tormented Roland, but the film does its best to suffocate him under a mountain of plot-heavy nonsense. Disappointing.

It falls because it's too embarrassed to stand. Featurette ('Legacy of the Gunslinger')