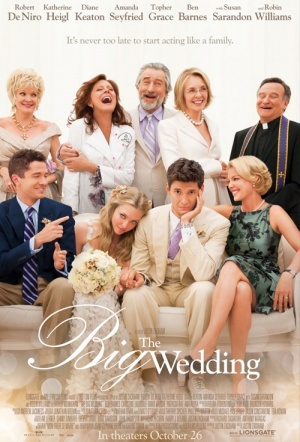 Long divorced couple Don and Ellie Griffin (De Niro and Keaton) are forced to play the happy couple for the sake of their son's (Ben Barnes) wedding after his ultra-conservative biological mother unexpectedly decides to fly halfway across the world to attend. With the wedding guests looking on, the Griffins confront their past, present and future and attempt to avoid killing each other in the process.

A laundry list of inappropriate and potentially embarrassing moments that strive mightily, but never quite manage to land the laugh.

The screenplay is chopped up into smutty sound bites constructed around the notion that casual obscenity delivered by respected actors of a certain age is hilarious. But it's just embarrassing.

Like many big weddings - a lot of things go wrong and not much goes right.

A game cast and lots of gamey R-rated shenanigans can't compensate for the silly comic contrivances that dominate.

It's almost impressive how the moronic new ensemble comedy The Big Wedding manages to cram three hours' worth of nonsensical subplots, extraneous characters, and implausible plot points into 90 minutes of streamlined idiocy.