If you enjoy feeling angry...

...then have these guys got a deal for you.

The Big Short does a great job of explaining the apparently inexplicable, tackling the world of sub-prime mortgages and collateralized debt obligations head-on without bothering to apologise if it makes you feel stupid in the process. Explaining this stuff without talking down to your audience is a tricky needle to thread, but director Adam McKay deftly manages it by making ruthless trader Jared Vennett (Ryan Gosling) into our narrator and master-of-ceremonies. Fourth-wall breaking cutaways to simplified lectures given by eye-catching celebrities (including Margot Robbie in a bubble-bath) have the dual advantage of breaking down the dynamics in an easily digestible way while also signalling just what a condescending creep Vennett is. It’s skirting a fine line, but McKay’s complete confidence in his gambit is infectious, which was enough to carry me through. Margot Robbie in a bubble-bath obviously helped too.

And, in the end, all of this bumf about credit default swaps, ISDA’s and bespoke opportunity tranches is essential to the film’s central, and devastating, thesis – that these are simple ideas that have been dressed up in complicated jargon in order to protect the world’s financial mandarins from being second-guessed by the general public. No matter how knotty it may all seem, the fact that major chunks of these processes can be explained to us in less than a minute by Margot Robbie in a bubble-bath means that… means that… Ahhh, nope… lost it…

The Big Short isn’t always as sure-footed as it should be. The effectiveness of the visual metaphors varies - the unseen monster lurking beneath Florida’s suburban housing developments is nicely evoked by the alligator in the swimming pool, but the huge dark glasses worn by rating agency cog Melissa Leo are a little on-the-nose (figuratively speaking)… Actually, the weakest parts are probably those that take their eye off the financial flapdoodle in order to try to deepen the characters. There’s a subplot about the relationship between Mark Baum (Steve Carrell) and his brother that does nothing but eat up time – none of these scenes tell us anything that Carrell’s performance isn’t already doing, and have the doubly unfortunate side-effect of putting Marisa Tomei in a needless role that the film could lose in a heartbeat.

Ultimately, though, the characterisations aren’t what’s really important here. This isn’t a film about individuals but about people as a mass organism, one with a seemingly inexhaustible capacity for greed, cruelty, self-interest and finally, possibly most horrific of all, forgetfulness.

You’ll be engaged and enraged in equal measure. 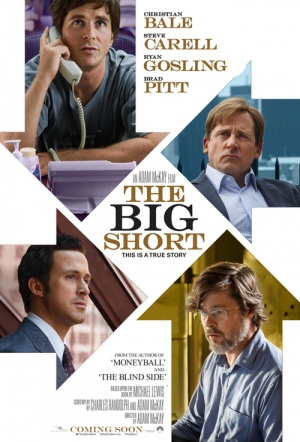