The Beatles: Eight Days a Week - The Touring Years 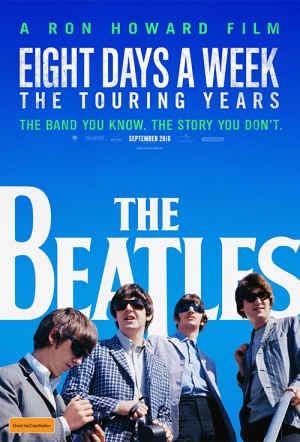 Documentary on The Beatles' phenomenal live peak from 1962-66 and punctuated by rare and exclusive footage. Directed by Academy Award-winner Ron Howard (A Beautiful Mind, Apollo 13).

The Beatles: Eight Days a Week - The Touring Years / Reviews

By focusing on the touring years of the Beatles, director Ron Howard has found a helpful means of incorporating tons of restored footage from around the globe that captures some of the mighty charge that accompanied their riotous shows. As the film follows the fab four around the planet and through the wringer, we’re welcomely spared too much of familiar subplots - the wives, the weed, the tensions within the band itself. By the end, though, comes a realisation that the circus surrounding the Beatles is hard to put to one side, and what makes it into Howard’s film feels like a drama-free oversimplification that only tells half the tale.

Taken on [its own] limited terms, "Eight Days a Week" plays nicely enough: the mostly uptempo Side A of a well-stocked greatest hits album, as it were.

90 percent familiar and a bit hagiographic as well, but just try watching it without smiling.

A wave of euphoria and happiness pours from the screen, and Howard's movie surfs that wave.

Not only allows the audience to hear from each of The Beatles in their words, but also get a sense of the collective cheek and charm that won them adoring fans all over the world.

This infectious piece harks back to happier, sweeter times for the Beatles and for pop music in general.

Ron Howard's documentary rightly keeps coming back to the music and the band's delight in making it. Good move. It truly is a joy forever.

Doesn't add much to Beatle lore, other than offering a toe-tapping two hours.

A fresh, thoughtful look at the world's favourite quartet.

It will make a fine entry point for younger auds who grew up with the songs but never had Beatlemania shoved down their throats.

The Beatles: Eight Days a Week - The Touring Years / Trailers Clip: To the Top, Johnny