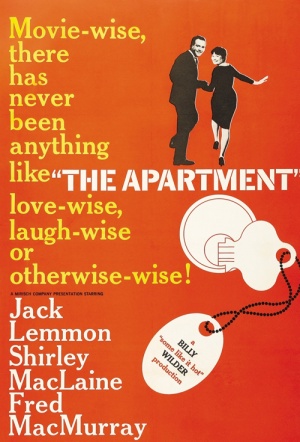 Legend Billy Wilder directs this romantic comedy about insurance statistician C.C. "Bud" Baxter (Lemmon). Bud makes his Manhattan apartment available to executives in his company, to take their floosies to. His boss, Sheldrake (MacMurray), finds out and promotes Bud in return for the exclusive use of the apartment for his own affair. When Sheldrake's girlfriend turns out to be Fran Kubelik (MacLaine), a pretty elevator operator Bud's had his eye on, he is heartbroken but accepts the arrangement.

The screenplay, by Wilder and I.A.L. Diamond, fills every scene with touches that spring only from talented, imaginative filmmakers. But where their "Some Like It Hot" kept you guessing right up to fade-out, "Apartment" reveals its hand early in the game...

Wilder and IAL Diamond's brilliantly witty screenplay has a serious undertow as it savages corporate ethics and conjugal infidelity. The humanity of the film resides in the sweet interplay between Lemmon and MacLaine, and the development of their relationship from initial awkwardness to binding trust is beautifully acted out...