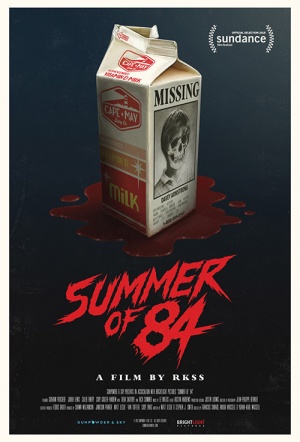 "For 15-year-old Davey, the thought of having a serial killer in his suburban town is a scary yet exciting prospect at the start of a lazy summer. In hormonal overdrive, Davey and his friends dream of sexual conquests until the news reports of the Cape May killer. Davey convinces his friends that they must investigate, and they uncover that his next-door neighbor, an unassuming, single police officer, could be the prime suspect. Could Davey possibly be right, or is it his overactive imagination?" (Sundance Film Festival)

"Summer of '84" is only cute and competent enough to be diverting; it's neither funny nor scary enough to leave a lasting impression.

Take all the worst aspects of Stranger Things, amplify them, and you still wouldn't have a movie as unrelenting terrible as Summer of '84.