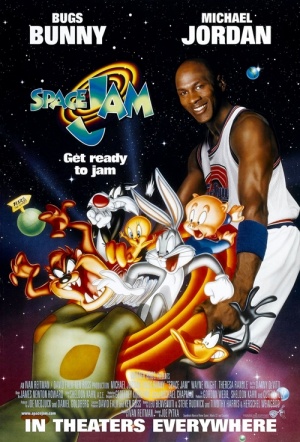 Michael Jordan enters the cartoon world of the Looney Toons in this in this mid ‘90s live-action/animated sports comedy.

In the deep reaches of space, there is a failing amusement park called Moron Mountain. In order to drive sales, alien owner Swackhammer concocts a plan to steal and imprison his newest attraction: The Looney Tunes. Crash landing on Earth, Bugs Bunny tricks the pint-sized creatures into playing a game of basketball for their freedom. However, the aliens steal the talent of current NBA stars, morphing them into a hulk-sized team called The Monsters. With little options, Bugs and the gang steal an NBA talent of their own: Michael Jordan.

The Space Jam soundtrack went 6x Platinum, including the singles Fly Like an Eagle from Seal and R. Kelly's I Believe I Can Fly.