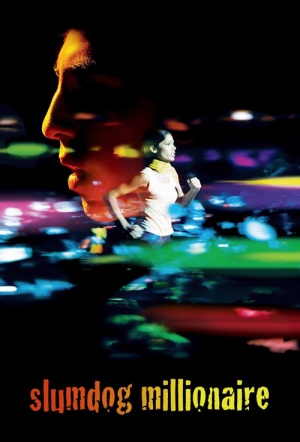 Jamal Malik (Patel), born into dire poverty, is an 18 year-old orphan from the slums of Mumbai. The nation is watching as Jamal climbs that little ladder of cash on India's 'Who Wants To Be A Millionaire?' And climb he does, eventually one question away from winning the jackpot: 20 million rupees. But then the show breaks for the night, and police arrest him on suspicion of cheating; how could a street kid know so much?

The police spend the night probing Jamal's past, recounting his life in the slums where he and his brother grew up, of their adventures together on the road, of vicious encounters with local gangs, and of Latika (Pinto), the girl he loved and lost.

Driven by fantastic energy and a torrent of vivid images of India old and new, Slumdog Millionaire is a blast.

A gaudy, gorgeous rush of color, sound and motion, “Slumdog Millionaire,” the latest from the British shape-shifter Danny Boyle, doesn’t travel through the lower depths, it giddily bounces from one horror to the next. A modern fairy tale about a pauper angling to become a prince...

The movie takes audiences to the poorest sections of India and shows a level of poverty and human misery that's almost beyond our imagining - and yet so pervasive that people seem to take it in stride, as an unalterable fact. The movie provides an indelible education into how other people live, and that's a noble function. We get the range of modern Indian life, from the technological sophistication of its television stations to the primitive shacks in which people live in crushing proximity to one another. The film is so vivid that you can almost smell it, and there are images that will linger with viewers for a long time.

When I saw "Slumdog Millionaire" at Toronto, I was witnessing a phenomenon: dramatic proof that a movie is about how it tells itself. I walked out of the theater and flatly predicted it would win the Audience Award. Seven days later, it did. And that it could land a best picture Oscar nomination. We will see. It is one of those miraculous entertainments that achieves its immediate goals and keeps climbing toward a higher summit.

A Hollywood-style romantic melodrama that delivers major studio satisfactions in an ultra-modern way, was made on the streets of India with largely unknown stars by a British director who never makes the same movie twice? Go figure.

What's perhaps most fascinating about the film is Boyle's relentless focus on the realities of present-day India as a vehicle for his spectacle and laughs.

Danny Boyle's finest since "Trainspotting." In fact, it's the best British/Indian gameshow-based romance of the millennium.