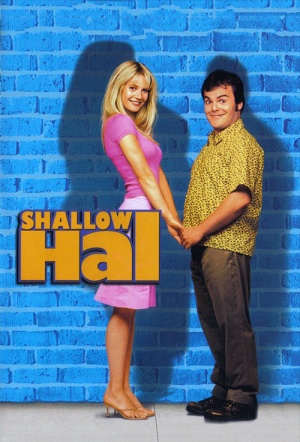 A shallow guy named Hal (Jack Black) falls in love with a 300-pound Gwyneth Paltrow because of her "inner beauty" in this Farrelly Brothers comedy.

Following the advice of his dying father, Hal dates only women who are physically beautiful. One day, however, he runs into self-help guru Tony Robbins, who hypnotises him into recognising only the inner beauty of women. Hal thereafter meets Rosemary (Paltrow), a grossly obese woman whom only he can see as a vision of loveliness. But will their relationship survive when Hal's equally shallow friend (Seinfeld's Jason Alexander) undoes the hypnosis?

With the relatively untested Black coming on awfully strong, the lack of directorial finesse lets the enterprise down, creating some clunky scenes and dead air where laughs might have been expected.

The film is not as funny as their best, but fascinates in the discomforting way it foregrounds the brothers' normally buried, facile moral dialectic.

There are enough moments of demented comedy to make you aspirate your popcorn, but by the end you may find yourself, with some amazement, sniffing back tears.

The film itself is little more than a series of fat jokes.

Often very funny, but it is also surprisingly moving at times.

Created in the broadest strokes imaginable, Shallow Hal lacks even a vestige of subtlety and is rarely so much as amusing.

A bit hit and miss, and devotees of the siblings' more adolescent work might be left wanting. But its leads make it consistently enjoyable.