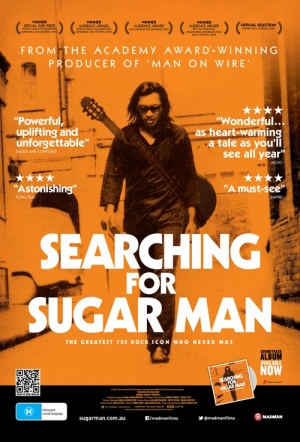 Two die-hard fans investigate the disappearance of their hero Sixto Rodriguez, a mysterious Mexican-American singer/songwriter who faded into obscurity in the States but found massive success in 1970s South Africa. Winner of Best Documentary at the 2013 Academy Awards.

"Rodriguez' albums were critically well-received, but sales bombed, and he faded away among rumors of a gruesome death. However, as fate would have it, a bootleg copy of his record made its way to South Africa, where his music became a phenomenal success. In a country suppressed by apartheid, his anti-establishment message connected with the people.

"When his second album finally gets released on CD in South Africa, two fans take it as a sign, deciding to look into the mystery of how Rodriguez died and what happened to all of the profits from his album sales. They uncover a shocking revelation that sets off a chain of events that has to be seen to be believed." (Sundance Film Festival 2012)

The tale is better than the telling – and the soundtrack's better still – but music this monumental demands its moment. Now go and buy the album.

A hugely appealing documentary about fans, faith and an enigmatic Age of Aquarius musician who burned bright and hopeful before disappearing.

This movie might itself make a modest contribution to rewriting the history of white South Africa.

The information they eventually dislodge about Rodriguez suggests a secular saint, a deeply good man, whose music is the expression of a blessed inner being. I hope you're able to see this film. You deserve to. And yes, it exists because we need for it to.

Music fans will love this indie documentary. Try to avoid Googling him before you watch, though.