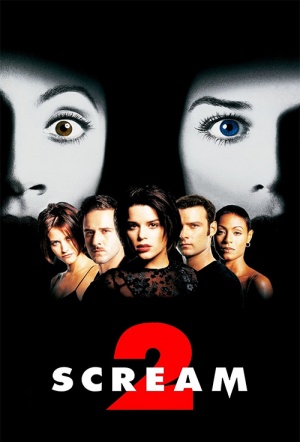 Two years after the terrifying events that occurred in Woodsboro, Sidney (Campbell) is now attending Windsor College in Cincinnati with long time friend Randy (Jamie Kennedy). Meanwhile, Gale Weathers' (Cox) best-selling book on Sidney's life has now been made into a major motion picture. When two college students are killed in a theatre while watching the new film "Stab," Sidney knows deep down that history is repeating itself.

Scream 2 has so much tongue-in-cheek trickery that it virtually escapes the horror genre.

...since Scream, the movie that originally inspired its progenitor was a far better, funnier and more agile satire on teen horror movies, this micro-franchise really wants putting out its misery.

Wes Craven was born to direct this material. One of the most successful of horror filmmakers.

There's enough ingenuity and scariness to please plenty of fans of the first film.

Some great comic - and terrifying - moments, but suffers for not being as original as the original.