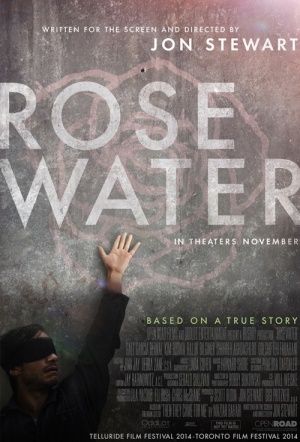 Gael García Bernal (No) stars in this true story of journalist Maziar Bahari who in 2009 was imprisoned, beaten and interrogated in Iran for over 100 days. The journalist's captors accused him of aiding to overthrow the Iranian government, using an interview/comedy skit from The Daily Show as evidence against him. This is the directorial debut of The Daily Show’s Jon Stewart, based on Bahari’s memoir.

Rarely does it makes sense to make a biopic about a life while incidents are still in play and the dust is still settling from crucial events. Without the objectivity of time, such films can feel myopic, biased or unfinished. Rosewater is one of those scarce occasions where it was right to strike while the iron was hot.

Stewart’s confident, superbly acted debut feature works as both a stirring account of human endurance and a topical reminder of the risks faced by journalists in pursuit of the truth.

Mr. Stewart's interest in the material is obviously personal, but his movie transcends mere self-interest.

The result suggests the education of a committed satirist in the art of storytelling.

That the movie is as tense and chilling as it is owes much to first-time director Jon Stewart's keen eye for the way humor surfaces even in the dark places.

Has an urgency that's all about the storytelling smarts of its first-time writer-director.

Stewart acquits himself solidly, though not thrillingly, as a beginning director ...

As a case history in the annals of political repression, it feels like a bit of a side show.