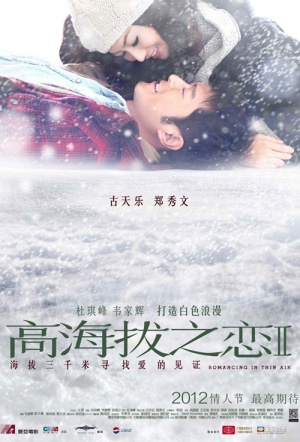 Director Johnnie To – known for his action-thrillers – helms this romantic drama set in the snowy Chinese county of Shangri-la. Stars Louis Koo and Asia’s Queen of Pop: Sammi Cheng.

"On the day superstar Michael (Koo) is to marry his actress sweetheart Yuan Yuan (Gao Yuanyuan), a coal miner shows up and runs off with the bride. While dodging the paparazzi, Michael inadvertently boards a truck driven by Sue (Cheng) and ends up in Shangri-la. Sue is an innkeeper and allows the depressed Michael to stay. Michael learns that Sue is one of his die-hard fans and that her husband, Tian (Li Guangjie), disappeared seven years ago without a trace. As time goes by, Michael helps Sue put her past behind her and Sue helps Michael get his life back together. When they both sense love in the air, Sue gets word Tian's body has been found..." (Official Synopsis)