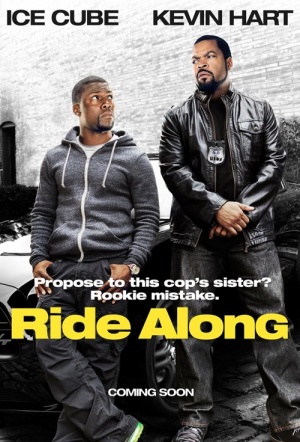 Buddy-cop action comedy from the director of Barbershop starring Kevin Hart as a wannabe policeman preparing to propose to his girlfriend. But first, he has to go on a 24-hour patrol with her hard-edged law-enforcing brother (Ice Cube) in order to get his blessing and prove his worthiness.

Are you Australian? Then apparently you won't go and see Ride Along. That's according to distributors who think cinema-goers outside of North America won't watch a comedy predominantly starring African American actors. It's a theory worth testing, but it will require a higher quality effort to do so.

A lazy and listless buddy-cop action-comedy.

Can you be physically assaulted by a comedy? Anything might seem possible after enduring Kevin Hart's jackhammer performance...

Saddled with an uninvolving plot, and largely content to coast on cop-movie clichés.

Romantic chemistry is rare in the movies, comic chemistry rarer still, and sadly there isn't much on offer in this action buddy comedy.

Hart’s manic comic invention and textured persona elevates it somewhere beyond the level of pleasing mediocrity onto the slightly more distinguished realm of the agreeable-enough time waster.

Turns out to be something like a comic riff on "Training Day."

The Pesci-in-Lethal-Weapon premise is spun out into a feature-length jamboree of minor laughs and clunkiness.