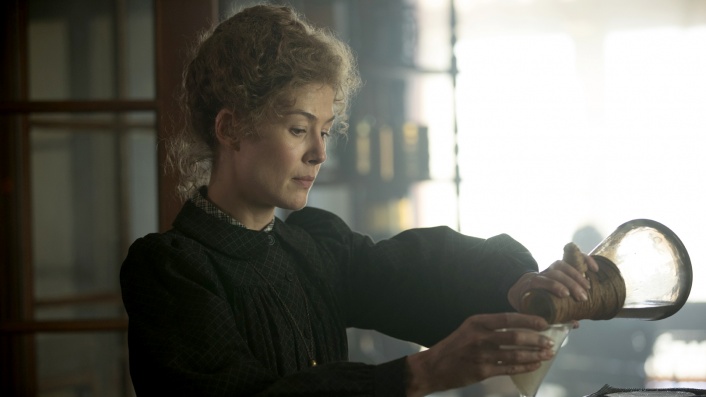 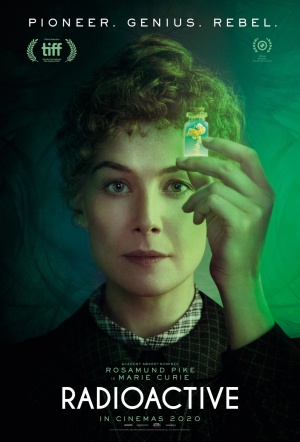 "When Maria lands in Paris from Warsaw at age 24, she is passionately curious, but impatient with lesser minds. Meeting the more established Pierre Curie (Sam Riley) could be her salvation, but Maria — now Marie — proves disastrous at flirting and small talk. Yet even as the two argue, they recognize a mutual attraction. Soon Pierre and Marie agree to not just work together, but to marry. As they push their scientific investigation forward, the Curies unlock forces far beyond their control." (Toronto International Film Festival)

At times audacious, at others irritatingly obfuscating, Radioactive feels like a half-life story and not the fulsome Madame Curie biopic one might have hoped for.

While the story treads familiar territory to anyone who's seen a biopic about a famous Great Man, director Marjane Satrapi elegantly considers the cost at the heart of Curie's discoveries, and Rosamund Pike delivers a truly stirring performance.

A timely reminder of this exceptional woman's achievements.

If this film does lift up Marie Curie, it does so for a two-dimensional Marie Curie of its own creation. Everything that should make her a richer character is fake.

Satrapi collapses a century of innovation and destruction from the discovery of chemotherapy to Chernobyl into a flat timeline that Curie can see right through as though looking at an x-ray. In those moments of stylistic imagination, the film glows.