A somewhat disappointing movie given that it is factually incorrect on several key matters and seeks to justify its existence by focusing on eroticism and titillating the viewer with sex scenes that are based on conjecture and probably only occurred only in the imagination of the writer/director.

In matters of factual accuracy the film fails by asserting that Prof. William Marston invented the lie detector when he did not. An early and less successful version of the lie detector or polygraph machine was invented by James Mackenzie in 1902. Marston and his wife only came up with the idea of incorporating the systolic blood pressure cuff. However, what is recognised as the modern polygraph machine was invented by John Larson in 1921.

In an interview William Marston's granddaughter Christie Marston stated that the film is historically inaccurate. She said that the creators of the film did not contact her family and that the "depiction of the family and Wonder Woman's origins are made up".

On the whole however this is an entertaining albeit lightweight movie that in my opinion could have been better researched and presented the subjects in a more favorable light.
0 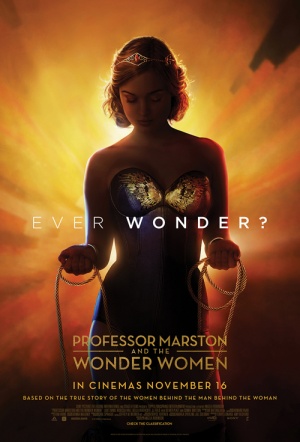