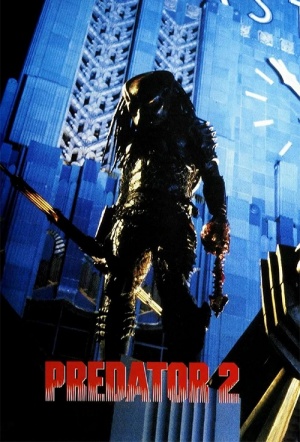 The Predator has returned in the sequel to 1987's Predator, only this time to savagely murder its way through Los Angeles's gangs - and cops. Stars Danny Glover and Gary Busey.

Los Angeles, 1997: Amidst the height of street violence in Los Angeles, the pressure on police officer Michael Harrigan (Glover) to solve a strange string of murders is mounting. Harrigan suspects the warring gangs and drug cartels, but FBI Special Agent Peter Keyes (Busey) knows the horrible truth: their killer is an extraterrestrial hunting machine (Kevin Peter Hall) with superior abilities including night vision and the the power to make itself invisible.

While the film doesn’t achieve the same thrills of the final 45 minutes of “Predator” in terms of overall excitement, it outdoes its first safari in start-to-finish hysteria. The real star is the pic’s design. Writers don’t waste much time on character development.

Showing little of the flair that distinguished its predecessor, this sequel lacks two winning ingredients: a suspenseful plot and Schwarzenegger.

Anyone who hoped to create the most mindless, mean-spirited action film of the holiday season will be sobered by the arrival of "Predator 2," an unbeatable contender on both scores. No one else need notice.

Since the predator is imaginary but the people who made this film are not, "Predator 2" speaks sadly of their own lack of curiosity and imagination.

No doubt about it, those who ask only for pure action will be getting their money's worth.

More story-led than the original with a high enough body count to make it a satisfying action movie.