Plots with a View 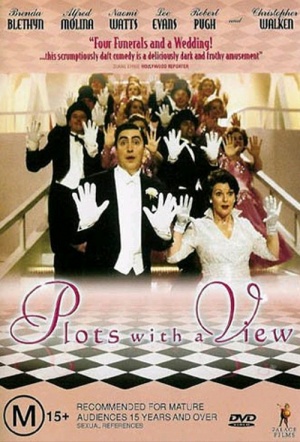 Boris Plots (Molina), director of Plots Funeral Homess, dreamed of only two things as a young boy: dancing and Betty (Brenda Blethyn, Atonement). But Betty was married  off to a gold digger  and Boris gave up his dreams and took over the family's undertaking business. Many years later, the two meet again when Betty's mother-in-law dies and the old spark is rekindled.

Her funeral will be held at Plots Funeral Homes, much to the chagrin of rival funeral director, Frank Featherbed (Walken). Featherbed, an American, is determined to revolutionise the undertaking business in Britain through the innovation of "theme" funerals (eg: a Star Trek funeral). In a desperate bid for happiness Boris and Betty decide to stage her death and run away together.