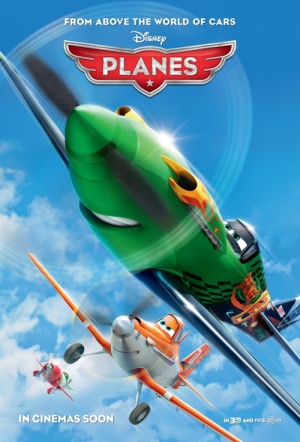 From the animated world of Pixar's Cars comes this high-flying Disney tale of a cropdusting plane named Dusty, who dreams of competing in a famous aerial race. There's only one problem: he's afraid of heights. Features the voice talents of Dane Cook, Julia Louis-Dreyfus, Stacy Keach and John Cleese.

Originally to be released as direct-to-DVD, early scenes impressed the powers-that-be at Disney enough to step it up to a theatrical release. The film's executive producer and co-writer is John Lasseter, the Pixar sage behind Toy Story and Cars.

Being a blatant cash cow-milking spin-off of Cars - arguably Pixar’s worst, least loved franchise - the idea of Planes has always smacked of direct-to-video filler. Still, that doesn’t really prepared you for how shockingly devoid it is of anything resembling originality, wit or surprise.

So overrun with broad cultural stereotypes that it should come with free ethnic-sensitivity training for especially impressionable kids.

For the most part content to imitate rather than innovate.

It's an amiable enough entertainment, gentle and good-natured.

It's a pleasant enough expression of a series of familiar story beats, but apart from a few brief action-sequence moments, it could hardly be more rote.

Despite the more aerodynamic setting, this Cars 3D offshoot emerges as an uninspired retread.