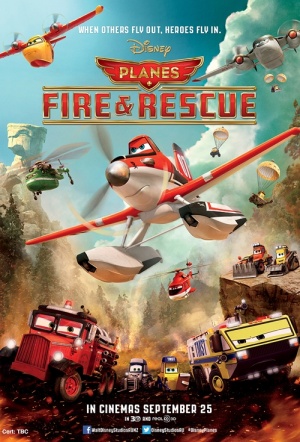 The sequel to Disney’s 2013 high-flying Cars spinoff continues the misadventures of Dusty (voiced again by Dane Cook), the crop-dusting plane who became an air-racing legend. But when engine damage hinders his racing abilities, Dusty joins an air attack team instead, tasked with the responsibility of dousing a raging wildfire that threatens to consume Piston Peak National Park.

Displaying a weird lack of memorable or endearing characters, this animated effort feels like a direct-to-video job from the 1990s.

Visually striking... though the backgrounds, like other aspects of the film, lack dimension.

Like Cars, this is essentially funny-animal animation with chrome and aluminium instead of fur.

Has the distinct whiff of a quick cash-grab sequel even though it's been in production for more than four years.

Beautiful to look at, this is nothing more than a Little Engine That Could story refitted to accommodate aerial action...

A solid voice cast doesn't add much more than cosmetic touches to this bland animation.