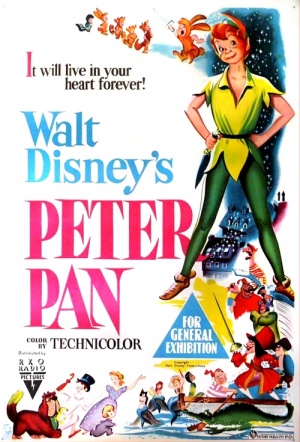 Walt Disney's 1953 animated adaptation of J.M. Barrie's play about the mischievous boy Peter Pan, leader of Neverland's Lost Boys. Peter visits Edwardian London and whisks away Wendy and her brothers to his magical world. There, along with fairy Tinker Bell, they join in the battle to save Pan and his friends from the dastardly Captain Hook.

Peter Pan was 1953's highest grossing movie in America. It was the last Disney film worked on by all of the famed 'Nine Old Men' - a core group of animators responsible for Disney's films since his first, Snow White and the Seven Dwarfs.