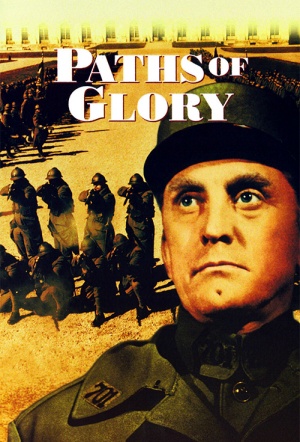 Directed by a 28-year-old Stanley Kubrick and based on the novel by Humphrey Cobb, Paths of Glory tells the story of an ill-fated assault on German forces by French soldiers in WWI, and the wretched consequences those soldiers face when they disobey orders. Starring Kirk Douglas and featuring an appearance by Christiane Kubrick.

Commanding officer General Broulard (Adolphe Menjou) orders his subordinate, General Mireau (George Macready), to attack a German trench position, offering a promotion as an incentive. Though a suicide mission, Mireau commands his own subordinate, Colonel Dax (Kirk Douglas), to plan the attack. When it ends in disaster, General Mireau demands the court-martial of three random soldiers in order to save face.

While the subject is well handled and enacted in a series of outstanding characterizations, it seems dated and makes for grim screen fare.

This is the director’s [Stanley Kubrick's] most vivid, most emotional and humane film, and perhaps his best.

As for the picture's significance, it comes to an inconclusive point.

It is arguably the best film about the first world war, and still has a reasonable claim to being Stanley Kubrick's best film.

"Paths of Glory" was the film by which Stanley Kubrick entered the ranks of great directors, never to leave them.

Star Kirk Douglas used to say he didn't have to wait 50 years to know that Paths Of Glory would 'always be good.' He was right.