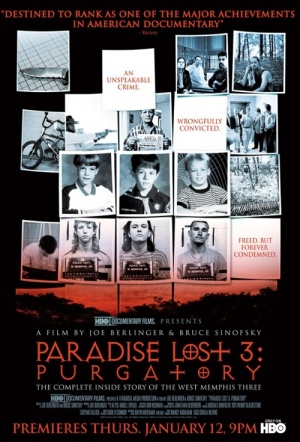 Third documentary investigating the conviction and 18-year sentence of the 'West Memphis 3', accused of the murder of three kids in 1993. The trilogy has had a huge impact on raising awareness and support for their innocence, championed most recently by Peter Jackson. Nominated for Best Documentary at the 2012 Academy Awards.

“Conclusion to the award-winning trilogy that spawned a world-wide movement to free three convicted men – Damien Echols, Jason Baldwin and Jessie Misskelley – known as The West Memphis 3, tells the complete story of one of the most notorious child murder cases in US history. Chronicles new developments, culminating in the unexpected conclusion when Echols, who was on death row, and Baldwin and Misskelley, who were serving life sentences without the possibility of parole, were finally freed from prison after more than 18 years.” (Official Synopsis)