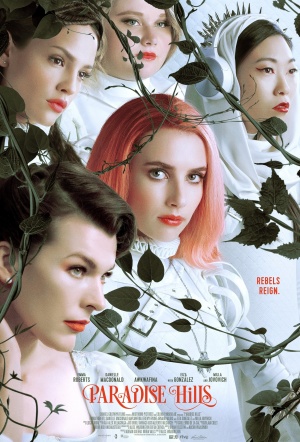 "When Uma (Roberts) wakes up alone on a strange island called Paradise, she instantly suspects it’s anything but. Helmed by the Duchess (Jovovich), Paradise Hills is a center for emotional healing that at its core serves as a reformatory-style boarding school for privileged young women. Yet behind the rose-covered pathways and fairy-tale decor, Uma and her friends learn something more sinister is at work." (Sundance 2019)

I don't know if Paradise Hill works well as the revisionist feminist fable Waddington intended, but as inspiration to generations of cosplayers to come, it's fantastic.

It's best to assume the filmmakers have their tongues at least somewhat in cheek, and just embrace the crazy as a pulpy camp indulgence, like some kind of post-feminist Barbarella meets The Handmaid's Tale.

Alice Waddington's movie cribs from sci-fi classics, but fails to add up to anything remotely interesting.