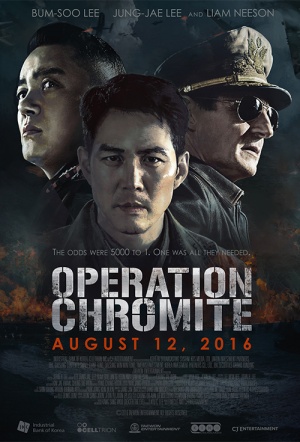 A U.S. General (Liam Neeson) must coordinate South Korean soldiers in a covert operation to infiltrate Incheon in this war drama based on true events.

During the Battle of Incheon during the Korean War, Commander in Chief of the United Nations Forces Douglas MacArthur (Neeson) commands UN and South Korean forces in a high risk covert intelligence gathering operation in North Korea.

South Korean reverence for MacArthur and the U.S. military is evident here in the same way that "Our Warmest Congratulations on Your Graduation" is evident in a Hallmark card.

The actual Operation Chromite was a surprise. In the movie version, you can hear everything coming from miles away.

The wooden dialogue gives Liam Neeson little to do beyond bite on his corncob pipe and berate subordinates who dare question him.

Undoubtedly, it’s Neeson who appears to have difficulties embracing his role, coming across as wooden.

Substantive character development rarely advances much beyond the principal performers and frequent digressions into political proselytizing don't do much to enhance the action.