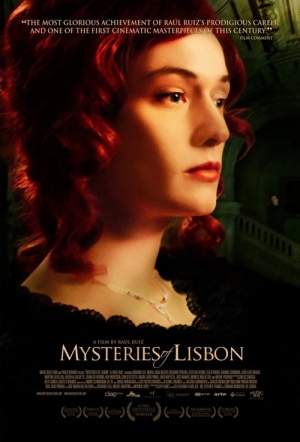 Award-winning 19th-century tale following a jealous countess, a wealthy businessman, and a young orphaned boy across Portugal, France, Italy and Brazil where they meet a variety of mysterious individuals in a series of intersecting stories. Due to the film's epic length (over 4 hours), some cinemas are screening the movie in two parts.

"The fate of a dozen characters intertwine over three decades, as one man's journey to find his parents takes him on a continent-spanning odyssey in Mysteries of Lisbon, a 19th-century tale of desire, indiscretions and hidden identity. Acclaimed France-based Chilean filmmaker Raúl Ruiz delves into a complex literary world with this adaptation of Camilo Castelo Branco's saga of the same name. Originally created as a six-part television mini-series, for theatrical release it has been concentrated into an engaging four-and-a-half-hour epic." (Melbourne International Film Festival 2011)

An absorbing, astonishingly fast four and a quarter hours.

For those with open minds, the cinema of Ruiz offers enormous and unique pleasure.

I got a little lost while watching "Mysteries of Lisbon" and enjoyed the experience.

Straightforward, with a classical sheen, even as mischief and hallucination puncture the serene surface.

A superbly guilty pleasure for a rainy day.

Storytelling of breathtaking scale and grandeur, even if the complex plotting may twist your synapses along the way.

For all its visual invention and full-blooded melodrama, Mysteries Of Lisbon never tilts to full-on crazy.