My Entire High School Sinking into the Sea 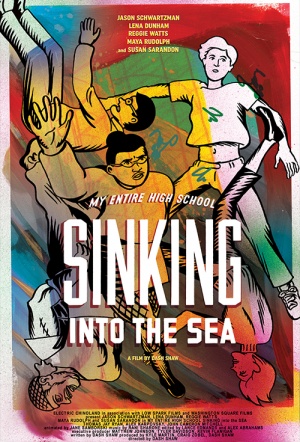 Dash (Schwartzman) and his best friend Assaf (Watts) are preparing for another year at Tides High School muckraking on behalf of their widely-distributed but little-read school newspaper, edited by their friend Verti (Maya Rudolph). But just when a blossoming relationship between Assaf and Verti threatens to destroy the boys’ friendship, Dash learns of the administration’s cover-up that puts all the students in danger. As disaster erupts and the friends race to escape through the roof of the school, they are joined by a popular know-it-all (Lena Dunham) and a lunch lady (Susan Sarandon) who is much more than meets the eye, in this wild satirical send-up of disaster cinema, high school comedy and blockbuster fare.

My Entire High School Sinking into the Sea / Reviews

The annoyance factor of "My Entire High School Sinking Into the Sea" extends to the animation, which is remorselessly clever and original yet still oddly uninvolving; it's like being buried in a dump truck's worth of antic indie drollery.

Combining a disaster movie with a high school comedy while also animating it is a rather ambitious combination. What's even more incredible is just how well it all works.

A sweetly subversive dig at the constricting codes of teen hierarchies, the sheep-like mentality of youth and the failures of the education system.