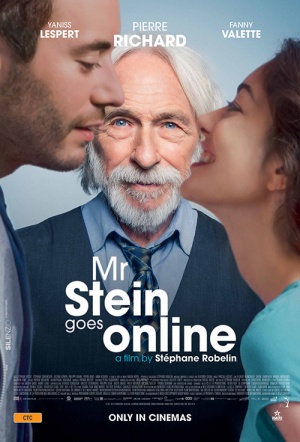 Pierre Richard (The Fugitives), one of France’s supreme elder farceurs, stars in Stéphane Robelin's (All Together) modern take on the Cyrano de Bergerac story.

"Pierre is a retired widower who hasn’t left his house for two years. On the insistence of his daughter, he learns how to indulge in the delights of the Internet, thanks to some patience from a young man, Alex (Yaniss Lespert, What’s in a Name?), who is hired as Pierre’s computer tutor. On a dating site, Pierre meets the young and gorgeous ‘flora63’ (Fanny Valette, Little Jerusalem) who wants to meet him. But, given Pierre has used Alex’s head shot for his profile, he needs to convince Alex to take his place at the rendezvous." (Alliance Française)

It will not surprise fans of Breaking Bad, or its spin-off series Better Call Saul, to be informed that actor Jonathan Banks – aka Mike, the hard-as-nails hitman and underworld problem solver – plays one creepy son of a bitch in Mudbound. In the Netflix-distributed feature film from African American director Dee Rees, his performance resonates in a bile-in-your-mouth kind of way, lending shuddersome gravitas to a dyed-in-the-wool racist circa rural Mississippi in the 1930s and 40s.

Despite sounding like an instructional video for aging boomers, Mr. Stein Goes Online is in fact a French farce — albeit one about an aging boomer.

Stephane Robelin's Mr Stein Goes Online is Cyrano de Bergerac for the age of the internet, a traditional feelgood movie given a modern gloss. It's also a little discomforting, in ways that Robelin may not have entirely thought through.

A film that plays it safe, tying up loose ends and treating all its characters with forgiveness.

Recommended for those who like their comedy broad and their more mature cinematic characters brazen.

A burgeoning romance that feels emotionally hollow and is further let down by its clumsy ending.